As I was sitting at the chest press after the 2nd set, thinking to myself “Why has this gotten so difficult lately?  It can’t just be the latest 5lbs.  And why are my shoulders still a little tweaky!”  when I had an “Aha!” moment.  I was reviewing my seating and grip and thinking it’s the same as always when I thought, “Hang on, the bars look a little high, did they do some work on these machines and muck up the settings?”

So I turned to my favorite tool – the picture of the the little man.  And sure enough, the bars are meant to be about mid-chest, and there they are almost top of my shoulders.  So I check my seat position, same setting as always.

When I realize..I haven’t adjusted my position on this machine since I was at least 30 pounds heavier.  I’ve lost at least some of my personal padding.  Which ties in to what I noticed three weeks ago when I switched to the row and introduced the fly and lateral raise.  I was using all those machines for the first time in a long while and went through a proper setup to make sure I did them correctly and was surprised at the seat setting being a bit higher than I would have guessed. 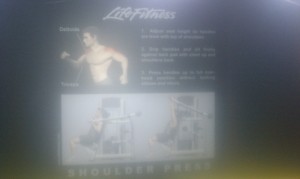 When I got to the shoulder press, same deal.  Bars were too high.  Though if I think about this, that probably meant I was cheating, rather than causing difficulty, but a cheat set is less effective than a proper set still helps explain in terms of lack of progress.

Because I’ve rearranged my workout last April and the rest of the machines are less affected by the personal seat cushion, I hadn’t noticed as quickly as I should.

So when I dismissed the shoulder tweaks as being sleeping funny related I may have only been partially correct.

Hopefully, the tweaky shoulders will abate now, and some shoulder press/chest press progress will continue now.

And woohoo to another visible sign of weight loss!

40 year old IT guy on a health and fitness kick.
View all posts by J. »