I’m not not posting it because I’m hiding, but because I didn’t receive my weekly email.  So here’s a screenshot.

So based on the interruption to the running program, you may be thinking I’m feeling a bit stressed out about the marathon.  And mostly I’m not.

Once I was able to get home and diagnose what was wrong and get an idea of how long it might take to heal up I was feeling pretty OK.  It could be worse.  I didn’t spend long trying to run through the pain and make it a major deal.  I am feeling it mostly subsided now.  And I can focus on what the issues causing it might be.  Even when I was walking the 4 miles back and had a lot of unknowns, I knew it couldn’t be too bad.  Walking was OK for most part (got a little tender towards the end but not bad).  I was calculating the weeks and saying, if worse came to worse,  I had 5 weeks I could rest with no impact to schedule at all.

Am I a bit irritated with my body’s failure?  Sure, but I knew I was pushing things from the beginning, and it gave out near the end, not the middle of the training program as I initially feared.  And again, there are worse issues to have.

And this is why I always planned the time to be able to work my way through two training programs.  I was worried from the beginning that I’d have some sort of issue keeping up with the first pass, that I would be repeating weeks.  So I always said to myself I would go as far as I could during the first program and if there were any issues, I could cut back and do what I could and come back to full strength on the second round.  Which is exactly what I’m going to do.

I’ve done a fair amount of reading and for the most part, it seems like ITBS is something you can rectify by fixing the underlying causes, but a lot of the exact solution will be touch and feel and amount of time will vary.  Whether you can train through it is also a little touch and go (mostly I would think based on underlying causes and how bad you let it get).

ITBS Causes:  sudden increase in mileage/intensity (partial check), too much hillwork (possibly – I do mid-weeks on mostly flat, but the course I use for long runs has some hills in it, not tremendous, but definitely an uptick), worn out shoes (check), overstriding (maybe?  I do note my foot strikes are different), running on crowned roads (I don’t think I do this too much, but I note I walk to the train on them every day for 15 minutes), sitting posture (check)

Previous to this, I have been emming and aweing over which program to do after this one ended on July 1st.  Well that question is easy now – I’ll be doing Northern Iowa again.  It’s 16 weeks, which gives me 5 weeks to heal up and rebuild some basic mileage. The program’s mileages in the opening weeks are also a little lighter than Higdon.  Higdon also is 5 days a week including cross, NI is 4 days.

This week, I am taking it easy.  The knee feels pretty decent already.  I have some stretches try.  I went to the gym on Tuesday and while the elliptical didn’t feel right, the recumbent bike was fine (arg the stationary bike! calorie burn inefficiency!).  In fact it was interesting to see how tense my entire left leg was as I started and then warmed up even tho I had minimal pain now.  If this proves ineffective or I start to lose my mind on the bike, I have a pool I can join to swim in.  I can see how the roller blades feel (just put new wheels in too :))

In short, I will keep up some basic cardio and strength training going the next 5 weeks one way or another.  I have a 5k race in Central Park on Thursday that I will do just to see how things are.  Worse case – I can walk it.  I already bought new shoes just as coincidence.  I will replace them at 300 miles not 450 next time.  If things are going well, I’ll resume some light running on Sunday.  If not, I’ll keep doing cross-training instead.  Until July 16th rolls around, I aim to keep runs down – I’ll work up to 5 – 6 miles max, again depending on how it feels.

I will work on my sitting posture.  I will see if I can walk less on crowned roads walking to train station on way home (crowds are tough, tourists and such).  I will do the IB stretches.  I have purchased an IB strap I can use if necessary.

The last decision I have made (noticeable on the last day’s entry on the food log).  I’ve changed my weight loss goals.  At 1 pound a week, I was down to 1900 calories a day.  That’s a tough zone for me (yea I know some of you are living on 7 calories a year).  I was only managing it with the running calories.  While I’m not satisfied with my current weight, I’m happy enough to slow down the final approach.  The weight loss was bound to slow down at this point anyway.

Instead of stressing over the injury, healing AND weight loss calorie misses (oh and I’ve got major activities at work happening over next month) – I decided to reduce the pressure on myself.  Especially since stress interferes with healing.  I changed my weekly target to 1/2 pound.  It ups my calories w/o stopping entirely.  If the healing involves more rest than I’d like – then I should be able to continue to meet calorie targets at that loss goal w/o stress.  If I can get back to exercising, then I can just beat the goals.  And I’d rather beat a realistic goal than miss an unrealistic goal.

Some of you may have noticed I missed last week.  Some of you may not have.  And clearly the 7 billion people who don’t read my blog are unaware of its mysterious disappearance and unexpected return.  (I forgot.)

Now on to business.

Food on the table app for meal planning.

Clothing makes the man (or woman)

Was a pretty good gym session on Monday night. 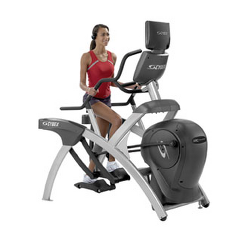 First up, was my old friend the Arc Trainer.  I’ve stopped using it since starting running, as most of the guides suggest to avoid using stair masters as cross-training – too similar to running.  But I was feeling like a change of pace and the bike continues repel me like garlic repels a vampire.  So I decided, ‘What the hey, I’ll take it easy on the Arc Trainer, see how tough it is now that I haven’t touched it in 8 weeks..’.  When we last left it, those 8 weeks ago, I was about 14 pounds heavier and just about doing OK on Level 6.

I kicked it off on Level 4 for approximately 4, possibly 5 seconds.  Then I said, ‘Whoa this feels easy!’ and promptly kicked it to 6.  Let me tell ya, I was on fire.  I R-I-P-P-E-D  through it.  It’s an interval program, I was cranking out 180 steps a minute on the low resistance levels.  I was cranking good on the high resistance levels.  When I hit half-way, I was like ‘WOW, already!?!’  When my phone rang during one of the high resistance times, I answered and spoke without breaking pace (wrong number).  I possibly made the woman next to me cry.  (I was sweating heavily, I really maybe did.  And yes, the infamous pools were there.)

But that’s not all folks!  Order now and receive a bonus can opener!  Wait, that’s not right.

Coming off that, we had…

unassisted pull-ups and chin-ups.  Now, I’ll be first to admit, they weren’t the prettiest or cleanest sets by any means.  The chin-ups were alright, the pull-ups, less so.  One thing using the assistance does is it provides balance as well as support, so I’ll have to work on them a bit.

An oldie (well by the definitions of techno) but a goodie: